“Surround yourself with only people who will lift you higher.” – Oprah Winfrey

After being an idea in the pipeline for over two years, the Kanara Entrepreneur (KE) Women Entrepreneurs held their first Meet & Greet over High Tea on 19th March 2022 at The Grand Magrath, Bangalore. Attended by 25 members who were kept actively engaged throughout the evening, the well organized event has set a powerful and motivating precedent for the group.

The 4pm sharp start was led with a prayer by Reshma Saldanha, Past Director Mentoring, and followed up with a keynote address by KE President, Clarence Pereira who reiterated the importance of a safe space for women entrepreneurs in KE to freely discuss, or vent, about their unique challenges and concerns and at the same time, be a source of support for each other sharing and celebrating each others’ wins The agenda of the Meet & Greet beautifully carried the essence of the KE Women Entrepreneurs group tag line – Inspire, Empower & Shine. The objective was initiated with a welcome note from Leena Lobo, Director Mentoring, and followed with a series of interactives designed and facilitated along with her organizing team: Laveena D’Souza, Reshma Saldanha, Rachana Rego & Sabitha Lasrado.

The Musical Arms facilitated by Coreen D’Souza acted as a fun ice-breaker to quickly introduce members to one another, followed by the Memory Game where 5 volunteers had 30 seconds each to correctly identify as many names to faces in the audience as they could. The tempo was maintained by other creative activities like Blinded Self Caricature as well as team games to hold the maximum drops of water on the face of a ₹1 coin and fastest texters’ luck to Wilson Food Products. One, literally, beautiful spot prize was an immediate makeover by Juliet Miranda won by Elizabeth Yorke.

The camaraderie and networking over High Tea successfully brought together members – old and newcomers alike in a spirit of collaborative support. Like one aptly member said, there was active demonstration of fixing each others’ crowns without telling the world it was crooked in the first place!

“A woman with a voice is, by definition, a strong woman.” – Melinda Gates

The group theme – Inspire, Empower & Shine – was driven home by brainstorming that engaged all members in groups to democratically arrive at future KE Women Entrepreneur group meeting objectives, and plans as well as ideas to consistently add considerable value to KE as a whole. The members unanimously agreed to the principle of coming in with an Attitude of Giving as well as finding ways to Start Conversations that may lead to Collaborations.

The KE Bangalore Chapter currently has 51 women members making up just about 15% of the overall membership. Out of these, only 2 are women Lead Members and just 1 woman member on the Board. President Clarence’s leading note shared a vision to not just have more women join KE, but to one day have a woman KE President. The intention seems charged with the powerhouse of women the evening witnessed. The evening concluded at 7pm with the distribution of gifts and prizes, and the encouraging Vote of Thanks delivered by Laveena D’Souza.

The success of the event was made possible only by the active contribution of every member in attendance who added value with their presence, voice and support to each other. Our sincere thanks to all those who came forward to help us make the event full of prizes and surprises. 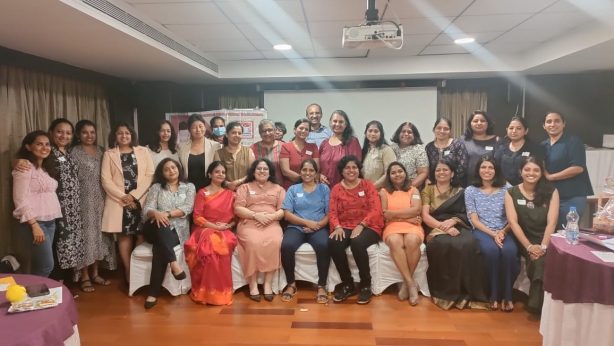 The women members of Kanara Entrepreneurs gathered for their second...