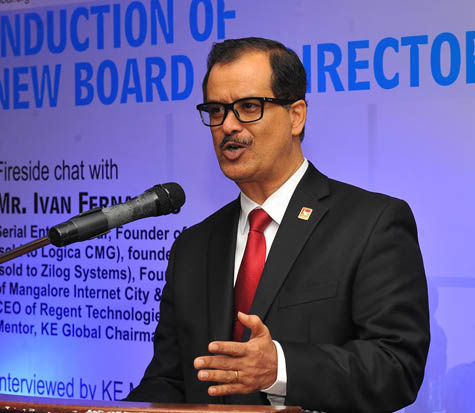 Ivan is the Managing Director of Regent Technologies Ltd. which specializes in IT & management consulting, incubation and investments.  Regent has funded several successful start-ups in the last 10 years. Ivan has envisioned technological solutions to several problems faced by the banking and financial sector and has successfully implemented them in several banks and financial institutions to improve customer service and staff productivity.  He has always dreamt big and pursued his passion to make it happen overcoming all obstacles that came in his way.  He has been a successful serial entrepreneur who has built several startups into well known brands including Ducont FZ LLC, a leader in providing mobile banking and corporate mobility solutions and Synectics (now CGI India Pvt. Ltd.) that was the leader in banking automation in the 1990s.

CIO Insider magazine on its cover in August 2017 highlighted another of his startups ‘ATC Online LLP’ for Delivering Technology to the underserved Education Segment.

At a personal level, Ivan is privileged to be recognized and honored by several reputed organizations such as in

In addition, under his leadership Ducont has won several global awards for innovation since its inception in the year 2000 including awards from several reputed organizations including Microsoft, IBM, Dubai Government, GSM Congress in Cannes and The Asian Banker.

Ivan is an Alumnus of St. Aloysius College in Mangalore and completed his Engineering in Electronics & Communications Engineering from University of Mysore.

He started his career as a Scientist with Bhabha Atomic Research Center in Trombay, Mumbai where he specialized in Image Processing.

Ivan is the founder and Past President of TiE Dubai (currently, Director of Mentoring) which he groomed to become a stable and influential organization for entrepreneur development in Dubai. TiE Dubai now promotes startups through the in5 initiative of the Dubai Development Authority.

Ivan is the Chairman of Kanara Entrepreneurs Global – a non-profit organization that he promoted in 2004 in Dubai to promote entrepreneurship among young individuals especially hailing from the Kanara region.  Today it has chapters in Dubai and Bangalore and three affiliates in Mangalore and Mumbai with a network of over 1500 entrepreneurs and professionals.

Ivan with the support of other like-minded entrepreneurs from Kanara Entrepreneurs Global promoted Mangalore Internet City Pvt. Ltd. to setup an IT Park to promote Mangalore (tier 2 city) to international IT companies and attract local talent.

Ivan strongly believes that for the community and the country to be strong and stable, we need to uplift the weaker members of the society.  Accordingly, he supports education for over 100 destitute students every year through the support of Pallotine Sisters (Snehalya) and Dharmjyothi Charitable Society.

He also takes care of several elders who are neglected by their children in their old age through the religious sisters at Maria Goretti Hospital in Kallianpur.

He is a staunch supporter of his Alma Mater – St. Aloysius Mangalore where in addition to his financial support, has served on the advisory board as well as lead several initiatives to automate various activities including implementation of ERP and online admissions in all their institutions in Mangalore.