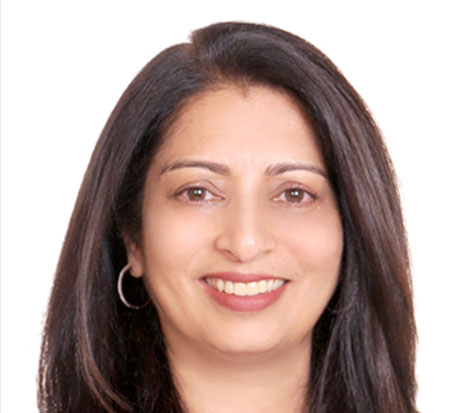 Shobha Mendonca is the managing director of Middle East Factory, Dubai, Reliable Fabricators LLC, Dubai and Reliable Metal Const. Industries LLC, Sharjah.  These companies specialize in design and fabrication of structural, non-structural and architectural metal works for the construction industry.  Under her leadership, both companies have grown to a workforce of 750 employees and have become major players in the steel fabrication industry in the UAE.  The companies have executed works in prestigious projects such as Burj Khalifa, Emirates Towers, Atlantis, Cleveland Clinic, New York University, Mafraq Hospital, Sheikh Zayed University, Dubai International Airport Terminal 3, etc.  in the UAE and other Gulf countries.  She is a force to be reckoned with in a predominately male dominated construction industry and has been featured on the cover of the Metal Works magazine. In 2014 she was also awarded the Woman Entrepreneur Of The Year By Christian Chamber Of Commerce And Industry, Mumbai

Shobha is a member of the Dubai Chapter of Kanara Entrepreneurs (KE). She served as the President of the chapter from 2010 to 2012. Shobha is a Director of Mangalore Internet City Pvt Ltd., a 75 acre commercial and residential development project in Mangalore. The vision for the project is to provide an economic boost to the local economy of Mangalore through the creation of jobs and provision of a thriving ecosystem for technology organizations.

Shobha hails from Bendore Mangalore and is the daughter of Celine and Late Gilbert Nazareth.  Shobha graduated with a degree in commerce from St Agnes College. She is married to James Mendonca of Vamanjoor, Mangalore who is a prominent entrepreneur and philanthropist in Dubai.  They are blessed with two children – Dr Shawn Mendonca who is a fellow in Urology at Columbia University Irving Medical Centre, New York and Samantha who is a Senior HR Executive with LinkedIn in California.

She continued her passion for sports after moving to Dubai and was the undisputed Table Tennis Champion from 1983 to 1997.  From Table Tennis she to turned to Tennis.  She won the Nations Cup tournament successfully for 3 years in a row representing India.  Apart from the above tournaments she has won several trophies in various other tournaments. She brings this same hard work and dedication to all her endeavors.

Shobha is an ardent believer in the necessity of education for all regardless of financial standing and as a result has founded the Mendonca Education Fund to provide financial assistance for the higher education of the underprivileged with her husband and his brothers.